Most people don’t go to a natural history museum to see art, particularly if there is a world-class art museum just blocks away. Despite my attachment to the humanities, I come from a family of scientists, and I am an equal-opportunity museum goer. I am always game for a trip to the Field Museum. But on a recent visit I found myself looking past the fossils, curious about the art. Who were the artists? What were they trying to show? I’ve rounded up a few, with some of the history that makes them interesting. Read on:

Knight’s paintings in the Evolving Planet exhibit initially piqued my interest. Most interesting of all is that his paintings were done primarily in the 1920s-1930s and scientists have learned a lot about dinosaurs since then. For example, his painting Reptiles of the Permian Period depicts what are now known as synapsids (not reptiles). In his piece Swimming Reptiles, Knight depicts an ichthyosaur leaping like a dolphin. This bit of imagination is just that–scientists don’t know if ichthyosaurs could leap! Nevertheless, Knight’s murals have lasting value almost a century later: they make the fossils come to life and spur on our own imagination, making this impossibly distant time easier to visualize. 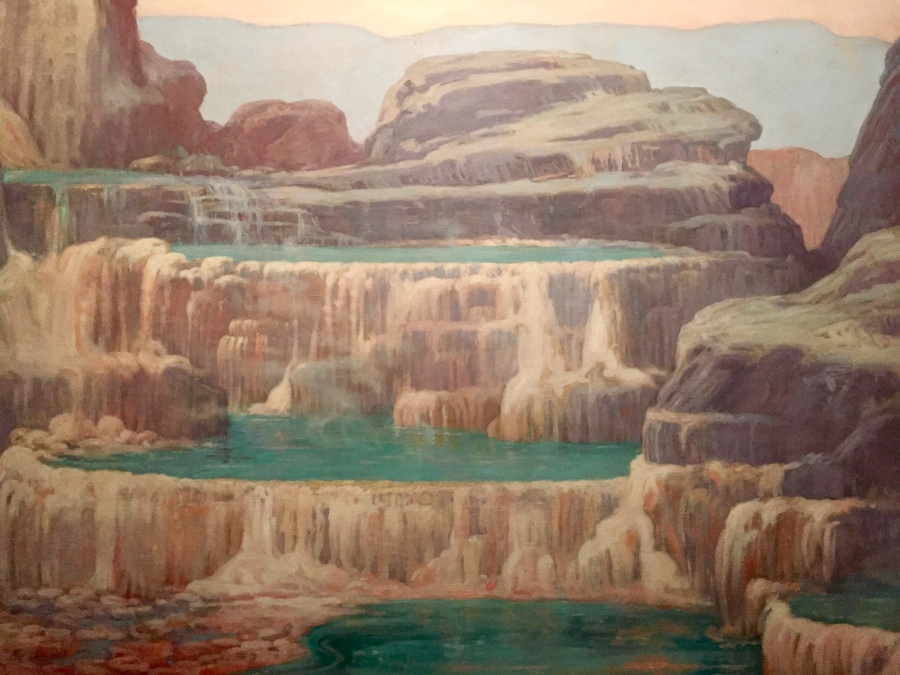 Corwin was an artist who specialized in museum murals; he worked in New York City but spent a great deal of time in Chicago as an instructor at the Art Institute. Of course I’d be remiss to not include this fun piece of trivia: Charles Corwin’s brother, Cecil Corwin, worked with Frank Lloyd Wright at the very beginning of Wright’s career. You will find two pieces by Charles Corwin at Frank Lloyd Wright’s Home & Studio: a pastel of a wheat field in the living room and a mural of the Arabian Nights (the tale of the Fisherman and the Genie) in the playroom. (The painting with the bird, below, is by Corwin; the painting with the penguins was done by Corwin and Arthur Ruecker.) 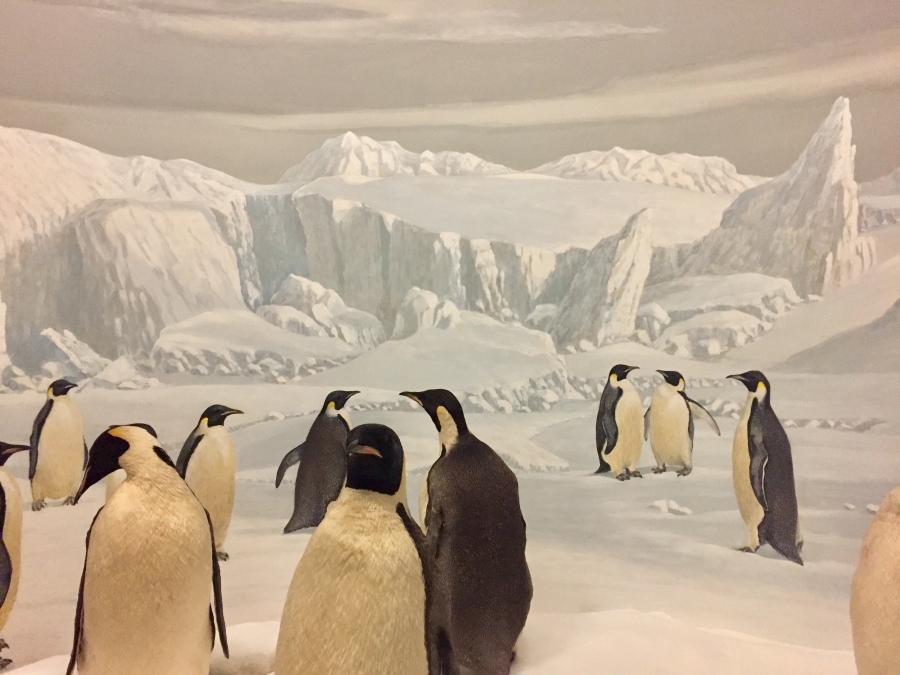 Christianson painted The Rift of the Serengeti Plain in 1992. This huge mural with an actual stone wall in front gives the impression that you’re looking straight from the exhibit out onto an African landscape. It fits perfectly with the Animal Kingdom exhibit, just down the hall from zebras and towering giraffes. Christianson used photos, her imagination, and over a year of painting to complete this eye-catching mural.

The artists of the Field Museum over the years have been many. In the historic dioramas alone, you will also find artwork by Patrick Gulley, Arthur Ruecker, and Julius Moessel. Most of these works are from 1900-1940. Impressively, they are still eye catching and imagination-stirring. But what is next? Look no further than the brand new T. Rex SUE exhibit. Partially transparent screens show an artist’s rendering of a Late Cretaceous forest, complete with swaying foliage and dinosaurs walking past. Whether it is 1900 or 2018, art proves crucial in creating an interesting and engaging environment. I realized this the moment I walked into the SUE exhibit and saw that two little girls and their father had taken a seat on the floor next to SUE’s 40-foot frame to take in an artist’s rendering of SUE’s world.

This is not the first museum I’ve written about! Interested? Check out these:

More about Carol Christianson’s The Rift Valley of the Serengeti Plain can be found in the book A Guide to Chicago’s Murals by Mary Lackritz Gray.

Want to visit or just browse? Head over to the official Field Museum website. Read about the Evolving Planet and T. Rex SUE here.

2 thoughts on “The Art Behind the Science: Artists of the Field Museum”