An 11 year-old recently asked me, “how can you tell how old a house is?” It’s a good question, and I was thinking back on it for the rest of the day, wondering if I had answered it the best way. The truth is, it’s complex. Of course I am often checking my field guide, but my first two answers were materials and style.

Sometimes you walk through a neighborhood and it all but shouts its time period at you. That’s exactly what happened to me recently in Seattle’s neighborhood of Capitol Hill. I somehow wandered into a pocket of beautiful, ornate American Foursquare houses. One after another. 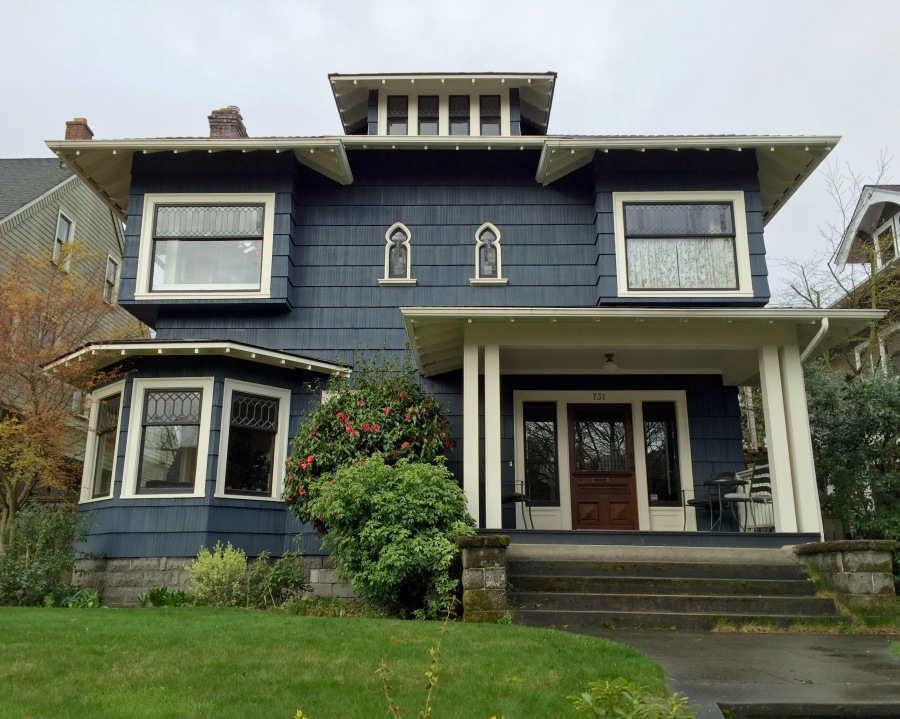 The American Foursquare house, a Prairie style subtype characterized by a hipped roof, symmetry, and a front entry, originated in Chicago (Oak Park and River Forest in particular are home to landmark Prairie style houses). The Prairie Style is one of very few styles rooted in the United States. The style is credited to a group of Chicago architects, including Frank Lloyd Wright (who, no surprise, lived in Oak Park), that have since become known as the Prairie School. It was a short-lived but exceedingly popular style, and it quickly spread across the country through magazines and pattern books.

American Foursquare houses are common in the early 20th century suburbs of large cities (hello, Oak Park and Capitol Hill!), most being constructed between 1905 and 1915. The area of the Capitol Hill neighborhood that I had stumbled into rang true. I started looking up construction dates: 1907, 1910, 1906, 1906. We complain now about the look-alike houses, and maybe it has gone too far with the mirrored cookie-cutter houses of modern suburbia, but the truth is, that’s how style works. It tells of a time period, a place, and a trend.

11 thoughts on “When Houses Look Alike”