It is hard to imagine a day before highways had numbers. In Seattle, everyone knows it’s easier to take 99 to the airport that I-5; if you’re driving through Portland and want to skirt around the worst of the traffic, 205 is a sure bet over I-5 or 405. Some highways have even made their numbers famous and are parts of popular songs: who doesn’t know get your kicks on Route 66? And whenever I find myself driving on the 101 I can’t help but sing, California, here we come, driving down the 101.

Highways didn’t always have numbers, however. In the early days, they had names. One of the earliest transcontinental highways was the Lincoln Highway, which was dedicated by the Lincoln Highway Association in 1913. The Highway originally ran from Times Square in New York to Lincoln Park in San Francisco, crossing 13 states in between. The highway was the first national memorial to President Lincoln and one of the earliest transcontinental highways. 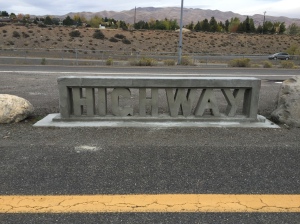 The highway was decorated with markers (the Lincoln Highway Association created 3,000 of these in 1928) and featured two bridges with cut-out letters naming the Highway. One of these bridges is located in Iowa and its (slightly smaller) twin is halfway across the country, just outside of Reno, Nevada.

The Iowa bridge features the words “Lincoln Highway” the length of one side, while the Nevada bridge, smaller in length, has one word on each side of the road. The Nevada bridge has been moved to a pullout on east-bound I-80 just west of Reno. If only highway bridges still had such character!

The Reno Gazette Journal had an article recently on the bridge, which inspired me to run over to the site on my recent visit.

I found the photograph of the Iowa bridge here.

The Lincoln Highway Association have their own website, here.

The Federal Highway Administration has the full story of the Lincoln Highway.

The historic photograph of the Nevada bridge is from the University of Michigan via the Lincoln Highway Museum website.

All modern Lincoln Highway photos from Nevada are my own.

8 thoughts on “Before Highways Had Numbers”