With Halloween approaching, I can’t help but bring up a costume party that surely ranks among the best ever (and is lore amongst architectural history students):


This party of the century is no ordinary group of buildings. The 1931 Beaux-Arts Ball hosted, among others, two dozen architects dressed as buildings they had recently designed. The theme, “Fête Moderne, a Fantasie in Flame and Silver,” urged attendees to look forward rather than back, and it was hugely successful despite its timing on the edge of the Great Depression. In this popular photograph, from left to right: A. Stewart Walker as the Fuller Building, Leonard Schultze as the Waldorf-Astoria, Ely Jacques Kahn as the Squibb Building, William Van Alen as the Chrysler Building, Ralph Walker as the Wall Street Building and Joseph Freedlander as the Museum of the City of New York.

This party is not completely alone in its style and creativity. Not only was it part of a series of Beaux-Arts balls put on by the Society of Beaux-Arts Architects (comprising of many architects trained at the famed École des Beaux-Arts in Paris). The Bauhaus school also had a penchant for parties and artistic costumes. This Curbed article tells this history particularly well, and with some fantastic pictures. The Bauhaus school was founded by Walter Gropius, a German architect considered to be one of the fathers of Modernism (along with Frank Lloyd Wright, Le Corbusier, and Ludwig Mies van der Rohe), and is recognized not only for its minimalist approach but the idea that even mundane, useful things can be pretty. The Bauhaus parties were far more abstract than the Beaux-Arts, and had themes such as metal, at the Metal Party in 1929, in which costume goers donned metal materials from tin foil to frying pans.

This New York Times article discusses the Beaux-Arts Ball in depth and is a great read. Thanks to this article for indentifying the architects and buildings in the above photo!

The photos are courtesy of and can be found at the Storefront for Art and Architecture.

“Definitive proof nobody did parties like the Bauhaus.” This great article on Curbed is highly recommended.

You noticed the differences between the Beaux Arts and the Bauhaus? It went much deeper than custome party preferences. The meeting (or clashing) between these design schools is a main theme in Ayn Rand’s The Fountainhead. 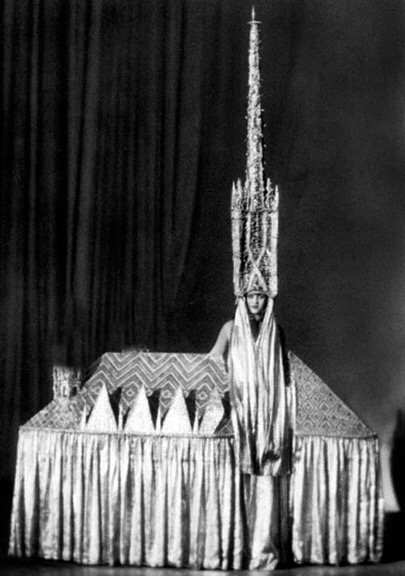 3 thoughts on “The Best Costume Party in Architectural History”