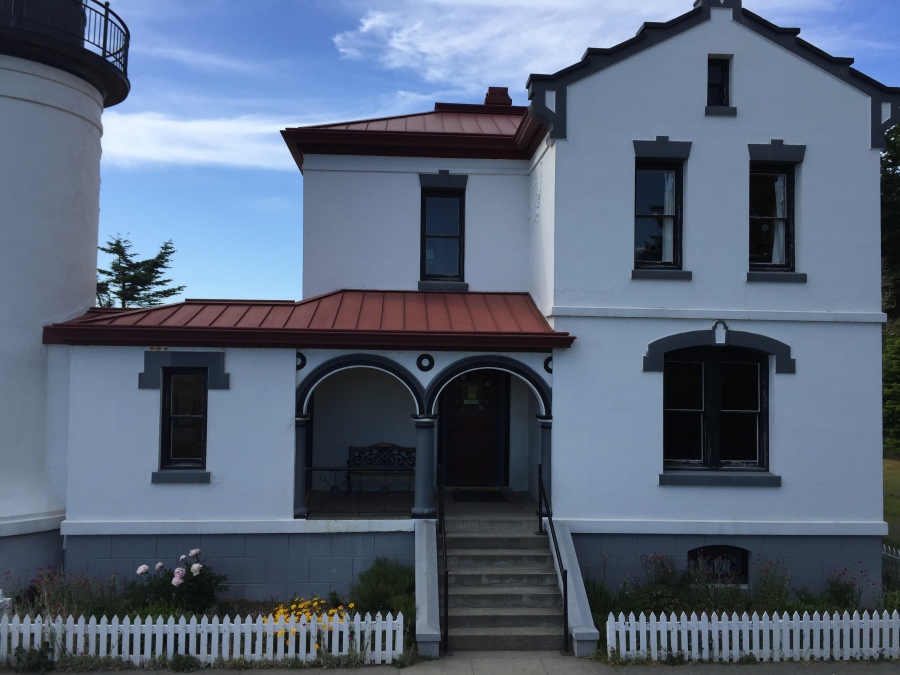 The Admiralty Head Lighthouse is located at Fort Casey State Park on Whidbey Island in Washington. The first lighthouse on this point was built in 1861, just 12 years after the island’s first settlers in 1848. The point, which on a clear day enjoys views to the Olympic Peninsula to the south, Mount Rainier on the mainland to the southeast, and the opening of Puget Sound to the west, proved a popular location. The federal government purchased 123 acres adjoining the lighthouse in 1897 and commenced the construction of Fort Casey. Installation of a series of disappearing gun batteries necessitated moving the lighthouse slightly to the north.

The current lighthouse was built in 1903. It was designed by the German architect Carl Lieck, who also designed the Grays Harbor Lighthouse. At 107 feet tall, the Grays Harbor Lighthouse is the tallest lighthouse in the state of Washington. Carl Lieck was an architect for the U.S. Lighthouse Board and is known to have brought characteristics from his native Germany to his work. For example, the Lieck-designed Burrow’s Island Light Station features a jerkinhead or clipped gable, a characteristic seen in Germany.

The 1903 lighthouse–still standing today–was built in the Spanish or Mission Revival style. Its brick walls are covered in stucco and are 18 inches thick. The density of the walls, which draw the Lieck motto, “build ’em stout, and make ’em last,” helped the lighthouse withstand the explosions from the nearby battery and are purported to help protect the lighthouse from earthquakes.

In the 1920s, the sailing ship was surpassed by steam, and in 1922 the Admiralty Head Lighthouse was decommissioned. The lighthouse and the adjacent Fort Casey are now part of the Fort Casey State Park, and the wind that sailing boats reached for is now found by hobby sailboats in the Sound and children’s kites on Fort Casey’s lawns.

Some credits and a little more:

Tudor Revival is always a good decision.
When you ask Frank Lloyd Wright to remodel your house, 1906 edition. The Hills-DeCaro House. Fun fact: Nathan Moore, owner of the adjacent Wright house, had this remodel done as a wedding present for his daughter, Mary.
The most amazing chimney & the prettiest gate. At the Norman Smith House by Graham, Anderson, Probst and White (1927).
Starting to feel like fall is coming in Oak Park 🍃 pictured: the Jewell House, built in 1906 and designed by E. E. Roberts